Many people may question, “Why would you wear cheap shoes?”.  My answer is, “I don’t wear them everyday and all you need sometimes are a pair of Dr. Schoell’s insoles and you’re good to go”.  All high-heels usually hurt after a while so what’s the difference. Yes, real leather may last longer, and I do have quite a few pair of designers shoes too, but I’m not gonna go in debt, ever again, for fashion. (Been there, done that so now I just make wishlists, lol).  I know that I post alot of blogs featuring Louboutins or Manolo’s but that’s for those who can really afford them. Some folks say that they wouldn’t be caught in non-designer shoes so to each is own. My followers and clientele vary so I try to accommodate every budget, but I also do realize that the economy isn’t in the best shape right now. Hey, there’s no harm in looking or getting the replica look. I for one would wear both designer and cheap shoes even if I hit the lottery.

Very often I wait for my designer shoes to go on sale and before I buy them, I make sure that they’re gonna be a classic pair that won’t go out of style the next year. When I buy my “cheap” shoes they’re usually a trendy type of shoe  so I’m not going to spend a whole lot for them anyway when next year they’ll most likely be out of style. But I will advise you to be very selective though. If you can see the glue or threading in them then maybe they are a little “too” cheap.  Payless Shoes have great selections and  carry shoes in wide-widths and they often do buy one/get one half off specials.

I saw a K-Mart ad this weekend in one of the Fall September magazine issues and I was so shocked at the upgrade of the style of shoes that they now carry. Names like Quipid, Soda, Delicious and other inexpensive fashionable shoes that you would normally find at stores like Bare Feet, Burlington Coat Factory, Urban Original.com, Dots or It’s Fashion. (Those stores I just named are where I get most of my trendy shoes from ). Now as you may have noticed from previous post I love cute inexpensive shoes but only certain stores sell them, especially in my size. Well there’s usually a K-Mart in everyone’s neighborhood and so now these shoe finds are easier to attain. There is probably more selection online but at least you have options for delivery. In case you didn’t know, Sears and K-mart have joined forces, and are now owned by the same parent company.  So therefore you can use your Sears credit card at K-mart and vice-versa (for those of you that do still use credit cards). I must say, K-Mart has come a long way over the past few years. Look at how fashionable, stylish and designer inspired these shoes are: 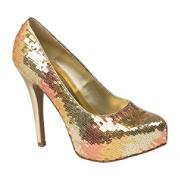 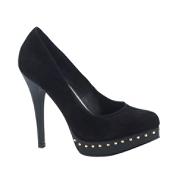 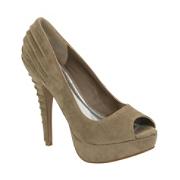 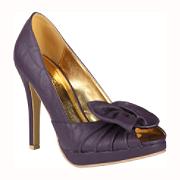 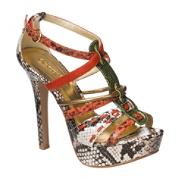 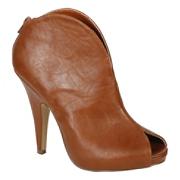 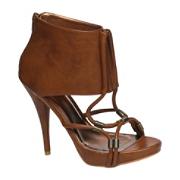 All shoes available at www.kmart.com

P.S. – Don’t forget about their layaway plan either!