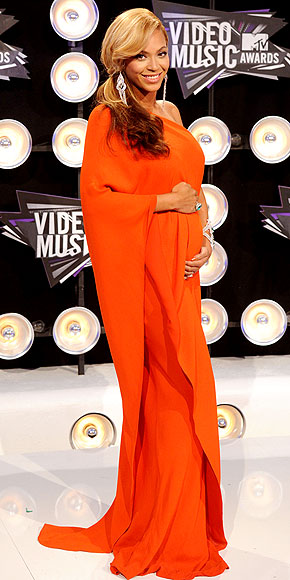 Unless you live under a rock then you should already know by now that triple-threat star Beyonce revealed last night during the VMA’s that yes, she is indeed pregnant. She literally stole the show. No one could upstage her last night. Beyonce arrived in an orange Lanvin gown and announced the news to the paparazzi on the red carpet.  I couldn’t be more happier for her and hubby Jay-Z. I’ve been waiting to hear this news forever. Ok, I know I don’t personally know them but if any of my readers realize by now, Beyonce is probably the only performer that I blog on on a regular basis. That’s because she’s my favorite singer. Although I was unable to watch the awards live last night due to my power still being out from the Hurricane, I had certain tweet updates sent to my phone and that’s how I was able to keep up with the live show. I mean you would really think that she’s naming me the baby’s Godmother or something. That’s how happy I am for them. Her and Jigga are a power couple and he’s 42 with no kids. I felt it was about time for them to pop one out. You never hear of any  “drama” with them and I like to see couples keep it that way. I mean how many times do you hear of a man having a “love child” with a mistress. Didn’t want that to happen to them if you know what I mean. So congrats to the Carters!!!!!

Sidenote: Who else can’t wait to see the fly maternity clothes and pics this chic is about to take, whoooh whooh!!!

In case you missed her performance: