Styled By Bella: My Photoshoot With VH1’s, Tionna Smalls, For Skorch Magazine and Her New Bookcover, “Men Love Abuse” 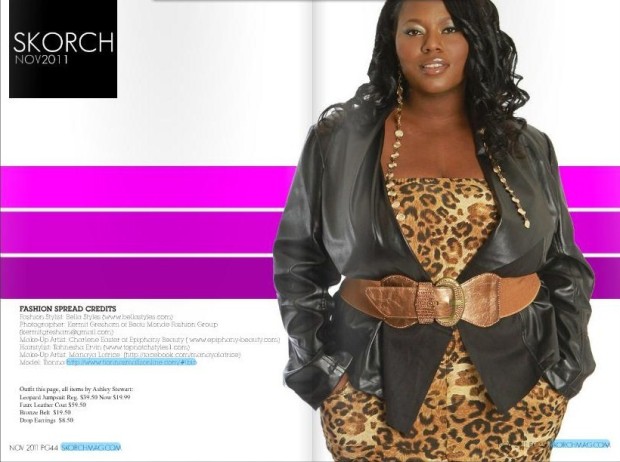 On Tuesday, October 25th I had the wonderful opportunity to style Tionna Smalls for her new book cover as well as for Skorch Magazine’s November/December issues. Tionna is best known from VH1’s, “What Chilli Wants”, where she was a relationship advisor to singer, Chilli, of the group TLC. I had Tionna as my “Curvy Girl of the Day” last July but it was great to finally meet her one-on-one and get to know her on a more personal note. I tell you what, Tionna taught me a lot about “the business” during our photoshoot and I so appreciate that info.

I had such a great time on set that you wouldn’t have believed all this was pulled together in less than 24 hours. Tionna called me on Monday and said that she was in town and wanted to do the shoot if I was available. I immediately called upon my “Bella Beauty Squad” (Photographer Kermit Gresham, Make-Up Artists Charlene Easter & Manaya Latrice and my hairstylist Tahnesha Ervin) and to my rescue, they came, lol.

I wanted to style Tionna in versatile looks so I went for both “Urban Fashionista” and also “Holiday Glam”.  Her urban looks, courtesy of Ashley Stewart and featured below, will be in the November issue of Skorch Magazine.  The Holiday looks, courtesy of Lane Bryant, which Tionna chose as her bookcover, will be featured in the December issue of Skorch.

For the first urban look I went edgy with an animal print jumpsuit. In my opinion animal prints are here to stay and will never go out of style. Since I am a featured blogger on Ashley Stewart’s website this month, I chose from those looks that I styled for them to also showcase on Tionna. (Read more on that here). I added a faux leather jacket and bronze belt to give the jumpsuit more flare. The outfit by itself is a knockout so I didn’t want to overdo it with accessories. Therefore, I only had her wear these coin drop earrings and no other jewelry. Tionna can wear this outfit to a book signing or it would be befitting for her launch party. 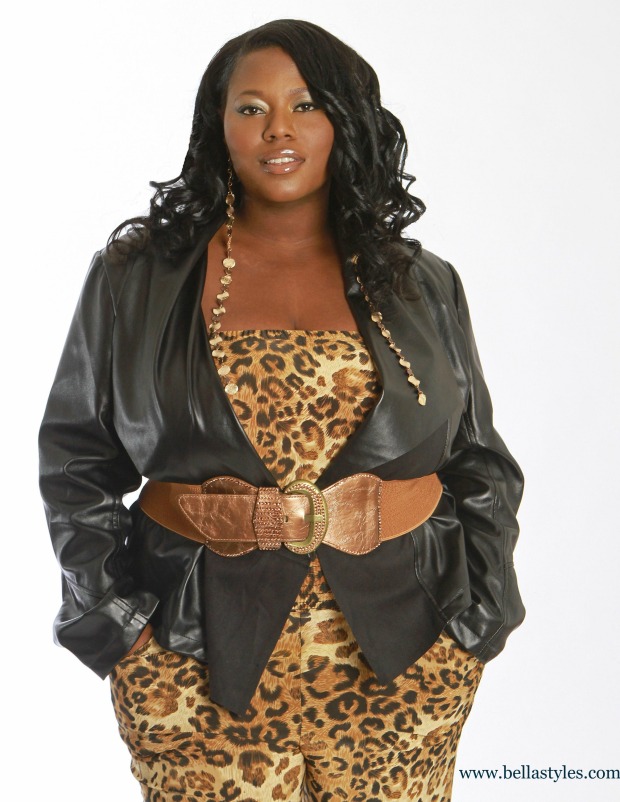 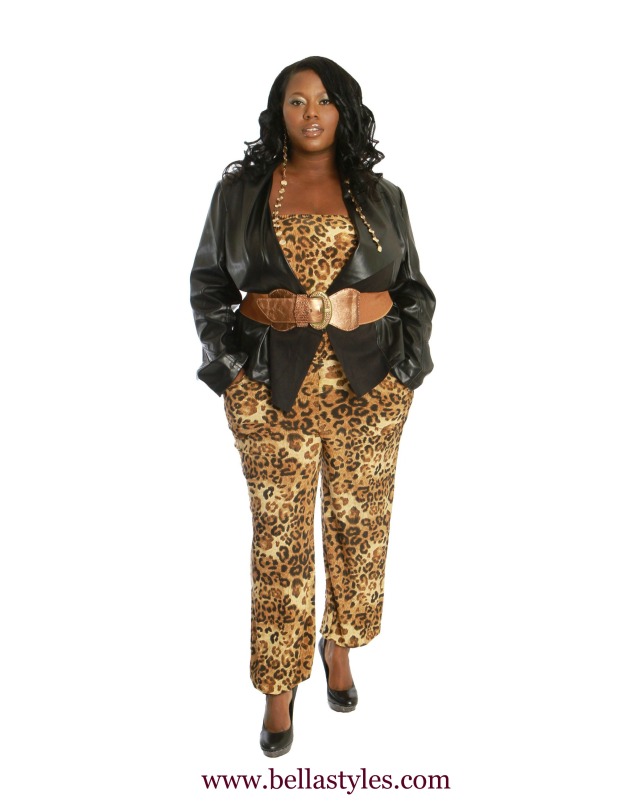 Next was what I call her “boardroom ready” look. When I first laid eyes on this faux fur collar cardigan I said this is for the “boss business woman”. Well that’s Tionna. She can wear this outfit to a meeting with a client and make power moves. I switched it up a bit though from my original styling for the AS website. This lavender ribbed turtleneck went so well with Tionna’s makeup that I used that instead of the aqua. The high-waisted plaid trousers have a lavender print in them too and once I added the purple belt, that made the outfit complete. As a stylist I often find myself purchasing items on a whim not even knowing where I’m gonna wear them. That was the case with this grey faux fur clutch. I’ve had it in it’s shipping package since last year and haven’t had a use for it until now. The clutch went perfect with Tionna’s collar of the cardigan. 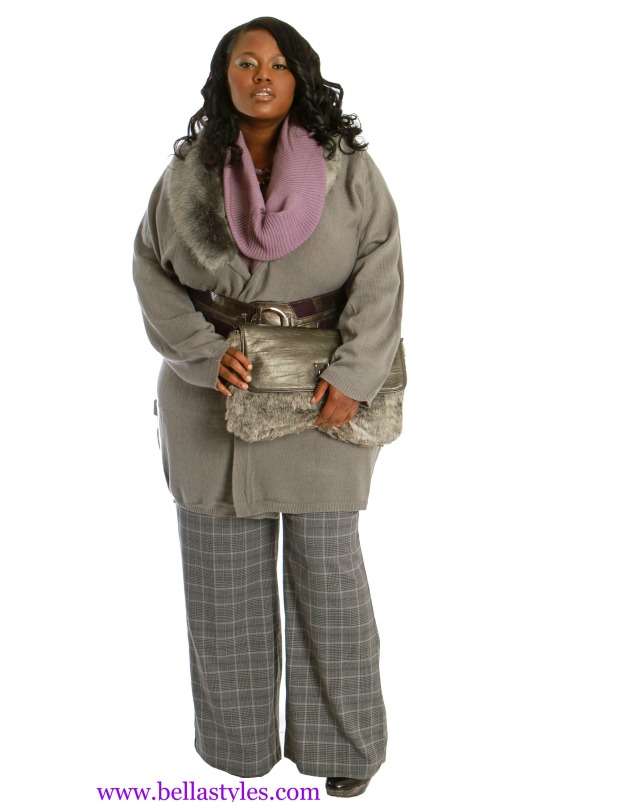 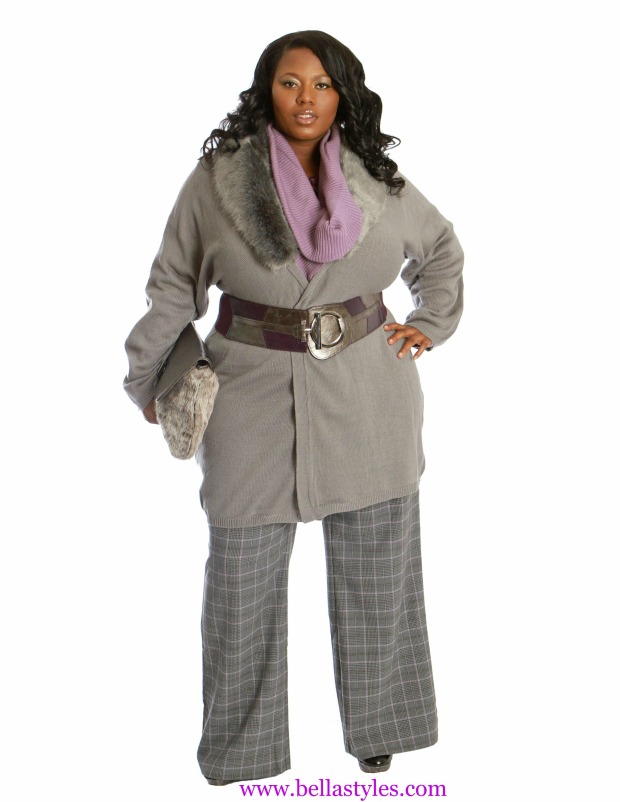 For the last Ashley Stewart look I went “all out” edgy. While shopping in the store last week I saw this faux lamb vest and started thinking, “that would be great for a photoshoot”. Tionna calling me was perfect timing because I was able to style her in this and it looked fab on. I used the same jumpsuit as I did above but instead this one is plain brown instead of leopard print. I added a brown belt to accent her waistline and the bold gold/ivory earrings and bracelets were all Tionna needed to complete her edgy look. I think this was my favorite outfit of the entire shoot. 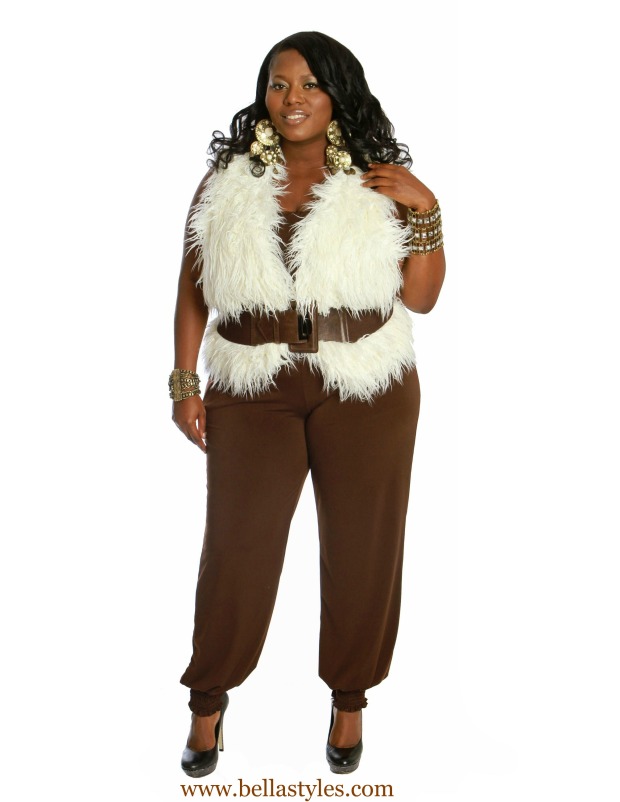 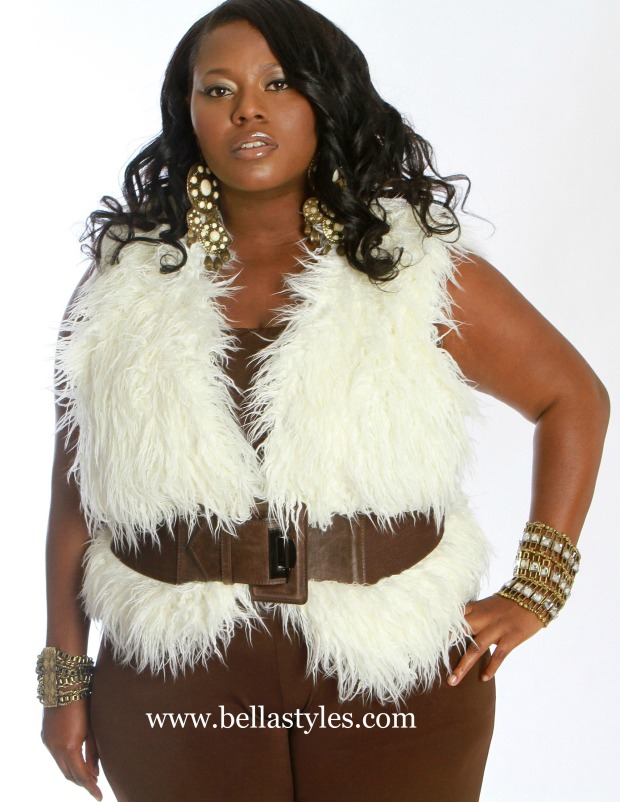 Be on the lookout for the second portion of my photoshoot with Tionna, featuring Lane Bryant, in next month’s Skorch Magazine December issue!!!

One thought on “Styled By Bella: My Photoshoot With VH1’s, Tionna Smalls, For Skorch Magazine and Her New Bookcover, “Men Love Abuse””