The Mis-Representation of Curves On The Red Carpet

So last week I caused a Facebook war on my page when I commented on actress Loretta Devine’s choice of wardrobe for her NAACP appearance. Oh hunny I was told that I was putting another woman down and that I have no fashion sense basically. I just had to laugh at those comments because some people tend to forget that not only have I taught plus-size classes but I’ve also hosted and styled fashion shows. (Not to mention I’ve dressed a  star or two as well). So in no way do I bash the curvy community. Meanwhile as I looked over my previous status updates, all I seem to do is put up uplifting quotes, give props to people, even when I don’t get it in return, and share fashion knowledge on my page. I know for sure when curvy celebs such as Queen Latifah, Beth Ditto, Amber Riley and Octavia Spencer get it right on the red-carpet I’m the first to give props to them. Funny thing is usually I never post how I REALLY feel when an outfit is atrocious but rather I just comment on the best dressed. I never wanted to “step on anyone’s toes”. But for some reason I couldn’t hold my thoughts on this Loretta ensemble. I felt so taken back as a plus-size woman.

There are just SO MANY plus-size designer options available now for this to be happening on the red-carpet. We should all know our bodies and what works for us and what doesn’t. Now I’m not perfect and can admit to some fashion mistakes myself but when on the red-carpet one must REALLY step their game up. Honestly, I’m shaped almost just like Loretta but you would probably never know it. I have large breast, a pouch and I don’t have a Kim Kardashian booty either. But I make sure to put on a girdle, body magic or some sort of shapewear before I wear anything clingy. From the look of Loretta’s dress she didn’t seem to have been wearing any shapewear. A woman with that type of body proportion should stick to dresses that flow from the waist or have some type of ruching. So below I’m sharing  some choices that I believe would have worked great for Loretta that night. 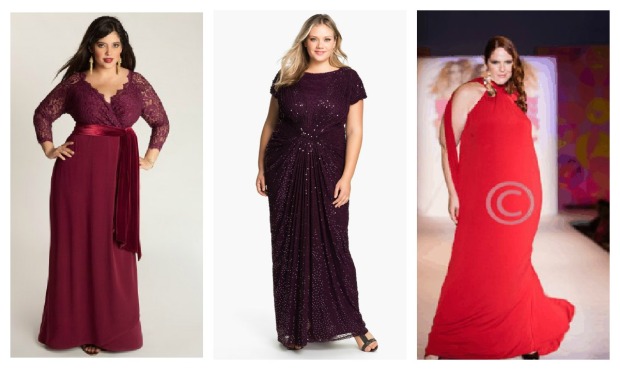 Curvy fashion bloggers and wardrobe stylist such as myself who study this fashion world day in and day out work too hard for to not get noticed. What I mean by that is if a wardrobe stylist who really knows the curvy world were to have dressed Loretta I bet this would have never happened. Let me just speak for myself when I say that plus-size designers such as IGIGI, Monif C., Qristyl Frazier, Shanda Freeman and Curvysta, just to name a few, all have red-carpet worthy apparel. But a regular ‘ole stylist who may just work with the average slender client all the time wouldn’t necessarily be privy of that knowledge. I bring all of this up to say that after watching the Grammy Awards on Sunday night, once again I was baffled at the red-carpet choice for curvy starlet Adele. At first glance I was like wow, she didn’t wear all black for a change. Then as the night went on and I kept seeing different pics of her, the more I realized that her dress choice print was a bit too ‘busy’ for her frame. Yes, full-figured ladies ‘CAN’ wear prints but I think a black wide-belt and black pumps were needed with this one to break up the busy pattern a little bit.

Now mind you, I have nothing wrong with a curvy woman wearing all black, but Adele used to seem to hide in black gowns. But now that she has stepped out in color, it was all wrong. Adele was wearing a dress by designer Valentino who is in no shape or form a plus-size designer. There were many jokes and funny pics floating around the web comparing Adele’s dress to that of Mrs. Doughtfire and also a character from “The Wiz”. (All were funny by the way, sorry). So below I share a few choices that I think would have worked for Adele and I even added a couple of black choices since she seems to be comfortable in that color mostly. But the black dress options that I chose were figure-flattering and worthy to win awards in!

Ok, I couldn’t help it, but just look at the comparisons of Adele’s dress to the movie characters. #ImDone: 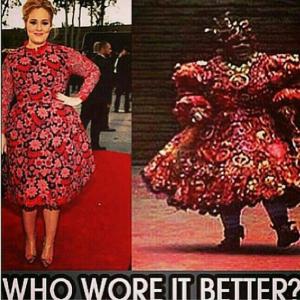