On Monday, September 20th at 9:30pm, CBS will unveil a new show on their network which will have two plus-size actors as the lead characters. This is a major breakthrough in mainstream television. MIKE & MOLLY is a comedy about a working class Chicago couple who find love at an Overeaters Anonymous meeting.  Officer Mike Biggs is a good-hearted cop who sincerely wants to lose weight. Mike’s partner, Officer Carl McMillan, is a thin, fast-talking wise-guy who, despite his teasing, encourages Mike on his road to slimness and romance.  While speaking at an O.A. meeting, Mike meets Molly Flynn, an instantly likeable fourth-grade teacher with a good sense of humor about her curves.  For Molly, focusing on smart choices isn’t easy while living with her sexy older sister, Victoria, and their mother, Joyce, both of whom flaunt their effortless figures while indulging their healthy appetites right in front of her.  Mike also faces temptation at the diner he and Carl frequent, where they’ve become friends with a Senegalese waiter, Samuel, to whom dieting is a foreign concept.  Mike and Molly found each other in the most unexpected of places.  Now, they’re about to find out where their quest for companionship will take them.

“Molly” is played by actress Melissa McCarthy. She is best known for her role as the clumsy culinary genius Sookie St. James in “Gilmore Girls,” and was most recently seen as Dena in the television series, “Samantha Who?”  She also guest-starred on “Curb Your Enthusiasm.” 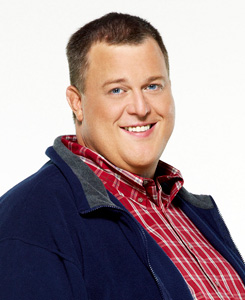 “Mike” is played by actor Billy Gardell who co-starred in the critically acclaimed television series, “Lucky.”  His other television credits include “Yes, Dear” and “Judging Amy” on CBS, “My Name is Earl,” “The Practice,” “Monk” and “Gary the Rat.”

Personally, I really hope this show has a true meaning to it and purpose and not just focuses on their weight the “whole” season. I’m glad to see two plus-size main characters in a show but I despise when the main focus is on their weight the whole time. I mean why when plus-size people do shows it’s always  about eating? If by the second episode it’s not going in the direction where they’re falling for one another then I’m sure I’ll see exactly which direction this is going 😦