Fashion’s Night Out Plus at BeautyFull Boutique in Alexandria, VA

Last night was the first ever Fashion’s Night Out dedicated to plus-size women and it was held here in Virginia at BeautyFull Boutique in Old Town Alexandria. After a long morning doing the taping for the CBS segment I then had to turn around and hit the road to attend this wonderful event. Luckily to make the ride go by smoothly I had fellow plus-size models LaTonya “Bubbles” Mann, Autumn Richardson and Crystal Diggs to ride with and boy did we have an adventure. After leaving Richmond yesterday afternoon we headed straight to Alexandria. Not even the torrential rainfall that we got caught in near Fredericksburg could stop us. We just had to make a pit stop to find somewhere dry to change our clothes and shoes. Yes, you didn’t really think that we were gonna ride for 2-hours all dolled up did you? (LOL) We sought shelter in the parking deck at Landmark Mall. You should have seen us all jumping outside the car to do make-up, change hair and clothes and switch shoes. It was a hilarious sight, but divas gotta do what divas gotta do. And it was all worth it too. Autumn got best dressed of the night and LaTonya got best shoes of the night. They both received a bottle of Queen Latifah’s new perfume as a door prize! 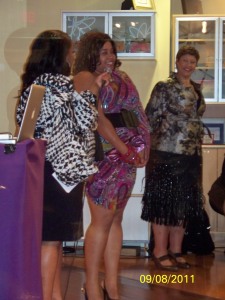 Once we arrived at the boutique we were greeted by swarms of waiters with trays of h’ordeuvres and margaritas. I don’t usually drink but I just had to try one. BeautyFull was setup so nicely with chairs in the main area for the fashion show presentation and a separate glass enclosed area for VIP. (Of course your girl got to sit in the VIP area, lol). Everyone who was someone in the DMV plus-size community was there. In attendance were Cassandra from Curvaceous Boutique, Theresa Flatts, beautiful curvy models & bloggers and Ms. Nina Taylor who served as the host for the night. 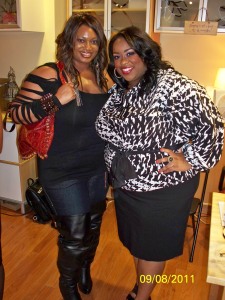 Featured designers for the night in addition to the clothing from BeautyFull Boutique were Pop Up Plus NYC, Ear Candy Accessories, Nicky B and Curvysta. They each showcased their designs on the models and the audience was wowed. We were treated to fabulous arrays of fascinator head pieces, bold statement jewelry and some curvy clothes that will be sure to turn heads.

As Fashion Editor with Skorch I got a chance to meet with a few models that  I will be working with on an upcoming issue. I’m super excited for that. It’s always great to network and meet new people. Some attendee’s and I were already facebook friends so we got a chance to mingle one-on-one in person for a change. 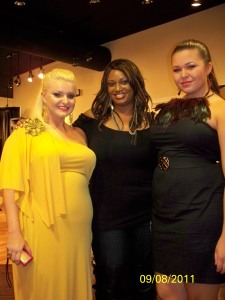 Since it was raining so bad we had to cut the night short and get back on the road before it got too late. But that was ok. There was plenty more excitement once again on the drive back. I kept having LaTonya play one of my favorite songs right now, “Rolling Hills”, by Jill Scott. Poor Autumn, her ears couldn’t take it anymore. I wouldn’t even let anyone in the car talk while my song was on. If they talked, we had to restart the song. That was the funniest thing ever. We all have been on facebook all-day cracking up about last night. I would definitely attend this event again. It was such a positive aspect on the plus-size community.

← OOTD: Biker Chic in Ashley Stewart, Dots and Torrid for “Fashion’s Night Out Plus”
My Interview for CBS “Virginia This Morning” on Kids Fall Fashion →

One thought on “Fashion’s Night Out Plus at BeautyFull Boutique in Alexandria, VA”