Ever since the time changed (actually before) I can’t seem to stay up past 7pm at night. So while last night’s American Music Awards were airing live I was counting sheep. But I did happen to wake up during the night and read my Instagram timeline to see pics and re-caps of the night. From Rihanna’s pinned -up doobie look to the live performances, I felt there was not much that I missed. But me being me I had to see for myself still. So I watched part of the awards show this morning on my DVR and found quite a few fashion statements that caught my eye. First off, MC Lyte has never looked better. She looks better and younger with age, go figure. Secondly, forget all of that after-Labor Day talk, White is the New Black. There was so much white on the red-carpet from Miley Cyrus’s pant-suit to the daring cut-out numbers worn by both Christina Augilera and Nicole Ritchie. Below are my fave looks of the night:

Of course black is always a hit on the red-carpet too. Here are my fave ladies in their black looks: 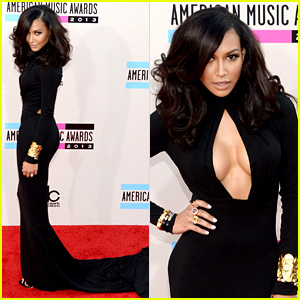 ← Bella on the Scene: “Clients and Conversations”
OOTD: “The Moto Jacket and Maxi Dress Look” →